Welcome back everybody to the next installment of "The Time I..." series!!! (*shakes head* I still can't get over the imagination of that name. Total sarcasm, btw.) Anywhooo, no, I did not literally time travel back to the 1700s (you know my stance on that kind of thing 😉), but it sure felt like it! And according to the graphic and title up above, you know exactly were my fam and I went.

Seriously, it was more than great—it was awesome!!! And if y'all haven't gone there yet, you can just go ahead and click the linky-dinky-doo at the top (the Image Credit) and it'll take ya right to the official Williamsburg site so you can book your next historical experience! (Actually I don't know if you have to "book" anything or if you can just go...my parents handled all that lovely stuff.) XD

But anyway, today I'm gonna share allll about my trip there a couple weeks ago so buckle up and make sure you have plenty of time to read this 'cause it'll be preeetty long. (Huh, I feel like I said that for my last TTI post...*shrugs* Just pretend that every post in this series will be long. 😉But hey, it sure makes up for last week's, amiright?)

[Disclaimer: I'll try to remember most of the trip correctly, but I don't have superhuman memory or anything, so I *might* end up accidentally lying to you about some of the details. #SorryNotSorry]

We got up early on Father's Day morning to pack up the car and leave. Sounds simple, right? Hah, NO. Whenever my family goes on vacation we always set a time to leave and end up actually leaving an hour later. So this time, we decided to set a time range and I think we did okay by leaving around 9:30 a.m. for a 10-ish hour drive. At least my sisters and I aren't snotty little toddlers who have to use the bathroom every hour anymore. XD Surprise, surprise, the trip up there actually wasn't so bad and we only stopped three times (once for lunch, once for gas, and another to stretch our legs at a scenic spot off the interstate)! 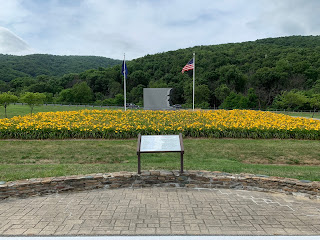 The memorial at the rest stop. 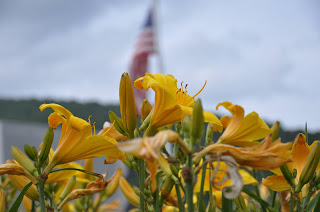 Some flowers (yeah, don't know their name. I'm not nature smart like that.)
My sister, Lydia, took this picture, though! Isn't the flag in the background cool?

After the rest stop, we continued our journey to Middle Earth Williamsburg. And lemme tell ya, it was a long one. But I, being the cooperative girl I am, I can guarantee you my sisters just snorted if they read that  XD contented myself with staring out the window and daydreaming, reading a little bit, writing some, and watching the 2019 Aladdin.

Then, long at last, we arrived at Williamsburg! Or more correctly, Toano, which is right outside of Williamsburg. We got dinner, drove an itty bitty more to the adorable lil' Airbnb we were staying at, and went to bed in preparation for the following day's adventure.

Day 1: Jamestown (or better yet, In Which We Almost Die of Heat Stroke)

We got up Monday morning and prepared to leave for Jamestown. I ate breakfast, got in trouble for reading my book too long instead of getting ready to go don't ask, and then we headed out to The Home of John Smith!

We got to Jamestown and while Mom and Dad went to get the ticket things, my sisters and I did what I most look forward to on vacations: We hoarded the gift shop. Okay, okay, not hoarded, but we did infiltrate it with our presence for about 15 to 20 minutes or so. I mean, c'mon. What's the point with going on vacations if you can't bring back a souvenir or two? Uhhhh, maybe to spend quality time with your family and create lasting memories of joy and happiness and stress? Eh, sure. But for the gift shops too. 😜After looking around the gift shop, we walked out of the visitor's center and straight into...a blistering mess of heat.

But y'all we were at JAMESTOWN. There ain't no way I was letting some 90 degree weather keeping me from seeing this place. (Admittedly, I wasn't thinking that at the moment more like remembering how amazing the AC in the building felt, but I put on a sweaty brave face anyway.) We walked down some paths and to the area where there were some indigenous people's huts and other cool things.
After walking around there, we headed down to see replicas of the ships that took the Jamestown colonizers to the New World. (At least...I think so. I didn't really do a good job at reading the history behind everything...)

After touring the ships we finally went to the actual Jamestown! (Well, not the actual thing, 'cause you know...replicas. But you get the picture.) 😉Speaking of which, here are some more! (Man, this might turn into a photo album rather than a post...)


After trekking around Jamestown, we headed back to the visitors' center, grabbed lunch at their café, walked through some of the indoor museum galleries, watched a couple videos in the theaters (my favorite was the 4-D video of Bacon's Rebellion. And no, it wasn't about dead pig meat—it was about a rebellious arsonist) and then we finished up the day with another emotional visit to the gift shop! Emotional? That's a bit dramatic. 'Tis not I tell you. I really wanted this certain T-shirt (it was love at first sight, y'all) but there were only three left in one size. A size that I was sure to fit, but didn't). 😢
So, after getting over a 5 minute fit of stewing depression, I ended up buying a stuffed animal instead. And no, you are not allowed to judge. I like to think of myself as a Professional Stuffed Animal Collector and tend to buy one each time I go somewhere for vacation. Not to mention I like getting slightly odd animals...last year I bought a skunk but this time I bought an otter! And I named him Oliver.
Once we bought our gift shop goodies, we left Jamestown, grabbed dinner, and went back "home".
Day 2: The Piano Store + Inception
Or more correctly, this was the day it rained monsoons and kept us inside all morning. HOWEVER, we didn't stay inside at the Airbnb. Instead, we visited this little piano store called Parker Piano Outlet and hung out there while it rained! And y'all. I'm tellin' ya. It was heaven on earth. Only the manager of the store was there and after he talked to us about the pianos for a while, he said we could play on any of them we wanted (well, except for the ones with the 'Sold' signs).
So we did.
And I took the opportunity to play on a $30,000 Yamaha.
And it epic.
Lydia was the star of the show, though, when she played one of her awesome compositions for a music teacher (who came in later) and got a lotta praise on it! Seriously, that teacher was IMPRESSED. Which *cough* is no surprise. (I'd brag about my sista's talent more, but we'll move on!) 😉
Around noon, we left the piano store and went over to a locally owned restaurant called New York Deli & Pizza which, lemme just say, if you ever go to Williamsburg, DO NOT MISS A CHANCE TO EAT THERE!!!! Their food was THE definition of FANTABULOUS! 😋😋😋See? Even the emojis agree. (My parents joked that they would drive all the way back up there just to eat at that restaurant.) XD So if you're ever in that area go check it out! You won't regret it!! (Here's *cough* the link to their site *hacks* if you wanna check that out too *wheezes* NY Deli.) 😉After lunch, we decided to go back to the house and chill since we weren't sure how rainy the weather would be in the afternoon. ('Cause it was raining mammoths and dinosaurs when we were at the restaurant.)
It ended up being super sunny for the rest of the day, but we still stayed inside to rest up and relax since we had been on our feet so much the day before (and would be the next two days). Additionally, it was on that glorious day when my sisters and I watched the movie Inception for the first time! I'll admit, it wasn't my favorite movie ever, but I still thought it was pretty cool and the whole dream concepts were intriguing! (After watching it, I could also understand why it got like four Oscars and a bunch of other awards.) XD
Day 3: Williamsburg
YOU GUYS. This was probably my favorite day of the whole trip!!! (Actually, I take it back. Day 4 was my favorite...heheheh no spoilers until we get there!) But I still LOVED it!! We got to the Colonial Williamsburg Visitors' Center when it opened (although there were still a bunch of people there typical) and went inside. My parents, Lydia, and my other sister Emma, stood in line to get the tickets and I went off with my grandmother, Nana, to scout out...you guessed it, the gift shop. *evil laughter* But...wait. What's this I see? It's...It's closed???

Fine then. 😑Maybe it'll open later. Once we got the tickets, we went outside and hopped aboard the shuttle that took us to the Colonial Williamsburg area. When we arrived, we made a beeline for the tour of the Governor's Palace. The line was pretty long but the wait wasn't terrible (I've suffered worse at amusement parks) and we had a delightful time touring the palace (which *cough* in all honesty, was more like a mansion. Biltmore Estate in Asheville, NC is waaaay bigger than this place.) But it was still cool! Besides, I would go on the tour again, just to see the entry hall. These pictures show why:

Might I just add, if I remember correctly, there were 540 swords just in the entry hall.
It was glorious indeed. XD The tour ended in the backyard of the of the palace where there was a huge garden. I thought it was really interesting how the paths through the gardens were covered in crushed shells during the colonial times because it reflects the moonlight at night!

Popular posts from this blog

- April 05, 2021
Hello, one and all, and welcome to my new blog, Soli Deo Gloria!     If you haven't visited my About Me page yet, then I'll let you hop on over there and check it out (if you wanna to know more about me, of course. 😉) If not (which is absolutely fine too), then I hereby present to you the very first post of this blog!     So if you did check out my About Me page, then you also learned a little bit about this blog and why I named it "Soli Deo Gloria". But today, to kick off this insane blogging journey of mine, I wanna share the actual reason of  why I decided to start a blog in the first place. (Yes, if you think about it, there's a difference). 😉So grab some popcorn and chocolate and whatever else will keep you from falling asleep while reading this   and let's begin!!!     It all started one lovely day around this time last year. When the big ol' lockdown happened, life didn't change too much for me since I was already homeschooled, but we did have
Read more 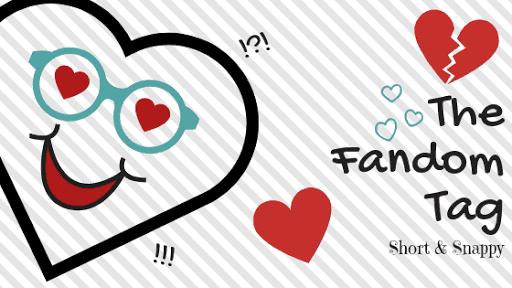 Victoria
Hi friend! I'm Victoria, a daydreaming, INFP, detail-oriented perfectionist, but above all, a Christian who has been saved by the blood and grace of Jesus Christ! I hope you accompany me in my sunshiny puddle of a blog!

Want to say hi? Drop me a message! I'd love to hear from you!

Quote of the Month

“True courage is about knowing not when to take a life, but when to spare one.” ~ Gandalf

Find Me on Goodreads! 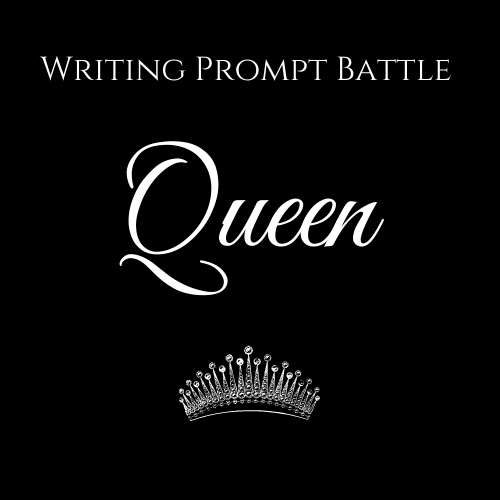 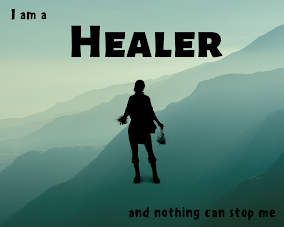 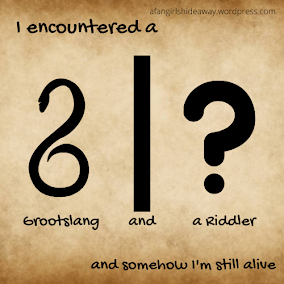